The week before this hang I was a bit bummed just to be honest. It was unseasonably warm, there was a burn ban, and quite a few people that normally attend weren’t able to make it this year. One of my favorite aspects is sitting around the campfire catching up with old friends and making new ones.

I had been out in the Sipsey Wilderness the week before and knew just how dry were the conditions. People were driving hours to the “Land of 1000 Waterfalls” to the driest conditions I have seen and there was a very real possibility there may not be any waterfalls, or just a trickle of water at best. I wondered where we could hike that would be scenic, interesting, and worth the trip with the higher temperatures (in the 80’s). The infamous “Sipsey Mile” which feels longer than an average hiking mile isn’t much fun in the heat and humidity of this unusually warm October.

But it doesn’t take much for me to drive the 40 miles or so to my favorite area to explore – so I was going! Having just started a new job I was afraid I wouldn’t be able to arrive until late (possibly at/after sundown), but my new job was nice and I was able to leave not long after lunch. As I drove closer and closer to the Sipsey Wilderness my excitement began to grow. I could not wait to get there! Once again although I probably live the closest, I was not even close to being the first person on site.

Greetings were made and I quickly set up my new Dutch Half Wit. I received this the previous week and this was the maiden voyage and I was excited to try it out.  I was also used my Jarbridge and Costco top quilt for insulation for the first time together to see if it would be enough for the low to mid 50’s.

People continued to arrive and it turned out to be an above average attendance. As much as I enjoy seeing old friends, there were a lot of new faces and it was awesome. It was difficult to get an accurate count because people came and went all weekend, but as a guess there were around 35 people total that came to visit from various states. Wolfpen Hunters Camp is a large place and we had room for  those attending and more room was available on the other side of the camp and surrounding area.

One thing I have quickly noticed about the past couple of hangs in Bankhead is that you will NOT go hungry! Friday night we had Squidbilly’s special recipe Chili with all the fixings which quickly disappeared. People arriving late were disappointed when the pot was empty upon their arrival. There was also a huge selection of things to eat including a cookie cake, chips and dip, fresh fruit, and many other yummy homemade goodies that kept appearing on the table. The tables were full and we nearly ran out of room to put all the new food. Saturday night’s entree included DaddyDaddy’s “Hate Beans” which we enjoyed so much there wasn’t hardly any to take home for leftovers. Hopefully his family isn’t mad at us. There was also homemade Chicken and Dumplings and Jambalaya. Of course, I had to try a bit of everything and it was all delicious. There was some discussion already about what to bring to the next hang. If you like to eat, sleep in a hammock, be included in a great group of people, and maybe even hike (not mandatory) then the Bankhead/Sipsey Wilderness Hang is for you!

After some discussion on Saturday morning, we had settled on hiking destinations. We did manage to take a group picture of everyone present as of that moment, but did not get one Sunday.

Since the Sipsey Wilderness has a limit of 10 people per group and we had more wanting to participate, we decided to stick to the Bankhead National Forest where that rule does not exist. First we went to the Kinlock Shelter and stopped by the Kinlock Spring which was actually flowing. This surprised me as the spring is at the top of a ridge and it has been so dry. There was also a small area that had been burned and was still smoking in a few places around the edges. The Forest Service had cleared a burn line around the area and walking on it I discovered this odd little area of moss.

We walked up the hill toward Kinlock Shelter. 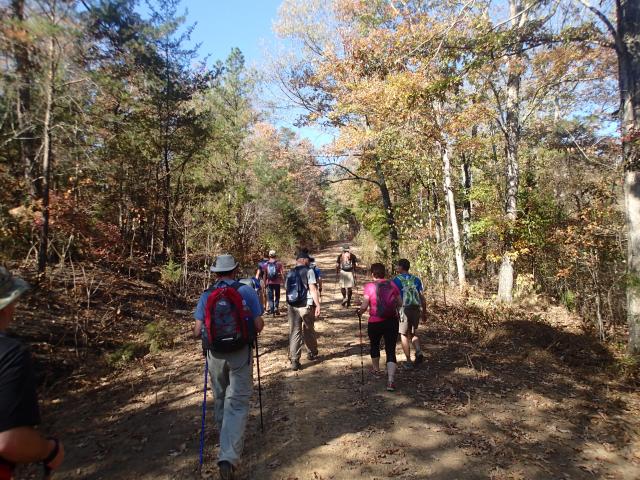 Once there we explored the area and viewed the Native American Carvings on some of the rocks. 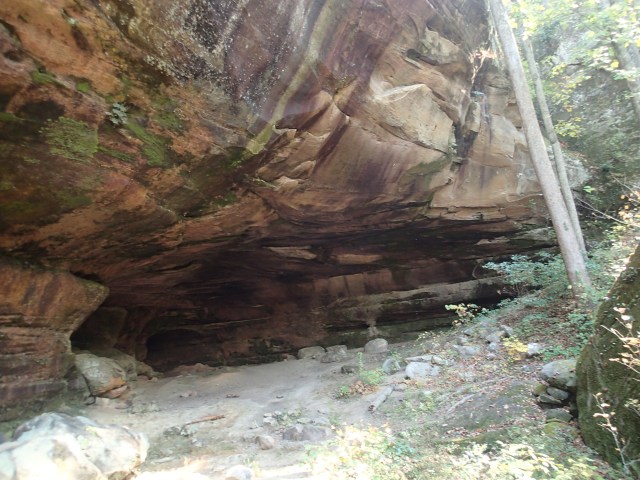 After pictures and some exploring, we climbed back up the hill out of the shelter and drove the short distance to Kinlock Falls. Once again I was somewhat surprised there was water flowing. It wasn’t much but it was enough for Max “Bubbles” Thrasher to discover a water filled hole that was waist deep and climb in. 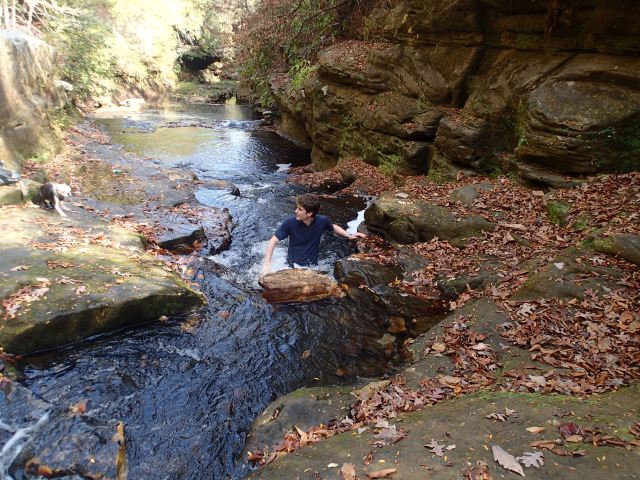 Bubbles in the water

After exploring the area, taking a few pictures, and pointing out the areas in the rocks that remain from an old grist mill, we headed on to the longest hike of the day. 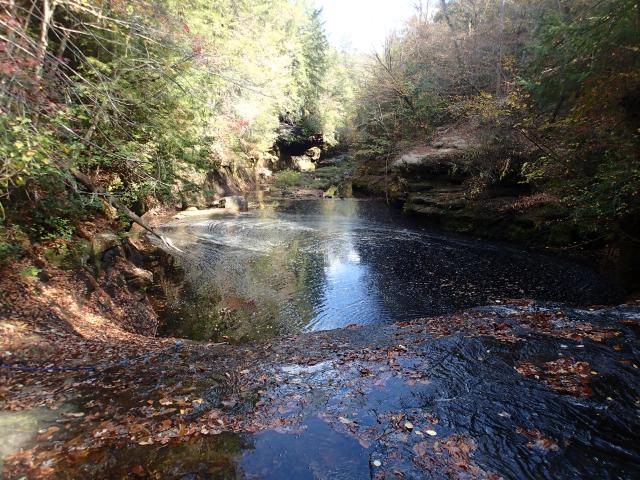 Looking downstream at the top of Kinlock Falls 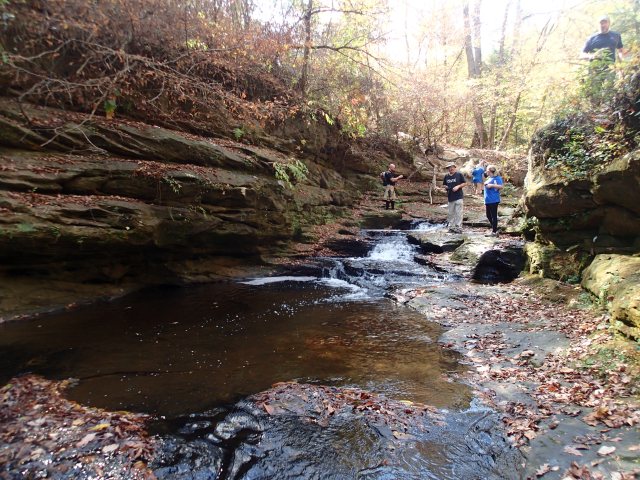 Looking upstream at the top of Kinlock Falls

At this point we were 100% for actually seeing waterfalls and the last destination was almost guaranteed to have water flowing. We headed down the road to Caney Creek Falls. The parking area is visibly marked with hand painted signs coming from either direction.  Park carefully not to block the driveway across the road. This is a very easy trail to follow but there is a bit of elevation change, especially for those not familiar with the terrain in the Bankhead National Forest. The official sign states the falls are 1.5 miles away, but the upper falls are more in the one-mile range. It may be 1.5 miles to the lower falls, but we did not venture down that way.

Upon arrival we discovered we interrupted an engagement photo session. We tried to stay out of their way as much as possible although we weren’t entirely successful. It isn’t the largest area and there were quite a few people there.

Not to be outdone by his son, Dale wandered into the water at Caney Creek Falls. After a little exploration and snacks, we headed back to camp for a late lunch and rest. 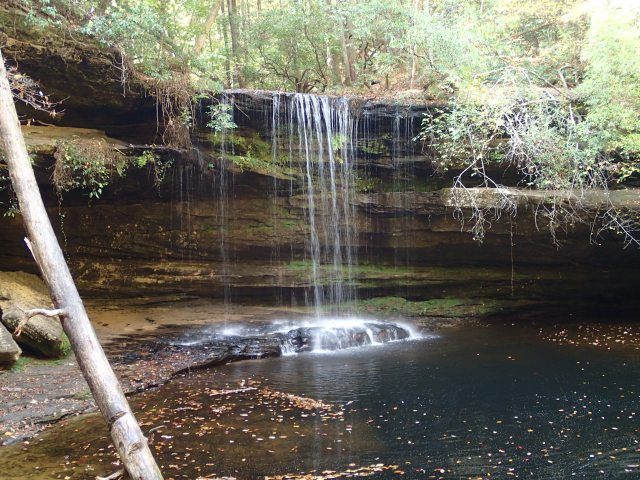 After the hike everyone was ready for a late lunch and a rest in the hammock including our Mascot Bebop.

Bebop Hanging out and resting

It was a bit warmer on Saturday night and we added to the fire ring from the night before. We had to be a bit creative because of the burn ban, but it worked. Our improvised “fire” gave off plenty of light to see the immediate area as we sat around.

Since it was the weekend before Halloween, we took a short (2 inch) hike to the Wolfpen Cemetery. Walking down Cranal Road looking up at the stars was remarkable as we avoided the vehicles traveling down Cranal road wondering what in the world we were doing.

After viewing the stars and a tour of Wolfpen Cemetery many people commented at the short life span as annotated on the tombstones. It seemed the majority of the sites that were labeled children.  Most of the dates are from the early 1900s. Then I imagined the quality of life including the lack of modern medicine and how the simply just a cold winter could decimate communities not to mention flu, pneumonia, and many other things that are easily managed today.

As we sat around the “fire” Saturday night a car pulled into the campground. The Winston County Law came to visit. He stated he stopped by only because he saw lights from Cranal Road as he drove by and wanted to check on the campground. As we visited the deputies they stated their surprise at the number of vehicles present at Wolfpen Hunters Camp as this was the most he has ever witnessed at a single time. He approved of our campfire and after a short discussion they drove off to keep law in the land.

Sunday morning people began to pack up and leave as many had long drives ahead of them. A few of us stayed and decided to do a short hike to Eagle Creek Falls. Although there was a little misunderstanding (the waterfall was 5 min from camp but the camp was about a mile away) it was enjoyed by all.

After the hike to Eagle Creek Falls just about everyone was packing up to leave or had already left.  I sat around with Dale and Wayne for a bit because I just wasn’t quite ready to leave.

We’ll start planning in a few months for the Spring Hang in the same location usually sometime in April. Don’t miss it or you will regret it.

As a footnote, I absolutely love the Half-Wit and it will become my new go-to hammock.  My insulation worked and I stayed warm but not hot.  I’ll try to do my review of the Half-Wit in the near future.

Below are some random pictures from the trip.  Enjoy!

On the way to Eagle Creek Falls 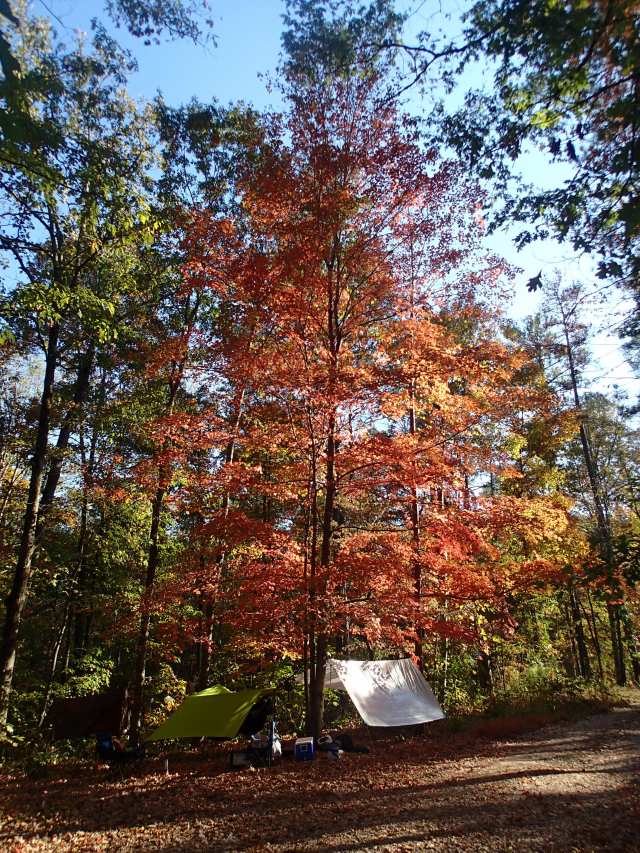 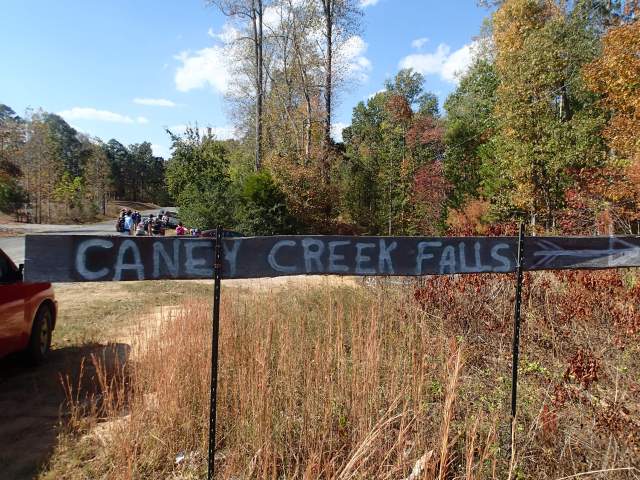