First Group Hang and Hike in the Sipsey Wilderness

I recently went “all in” on hammock camping. If you hate camping because you can’t sleep or it’s not comfortable then you need to try a hammock. A GREAT resource is attending what is called a “Group Hang” where hammockers come together to a central location and hang out (pun intended) for a weekend. Another great resource is http://www.hammockforums.net and this is where I have learned a LOT. It was from this Internet forum where I met a bunch of guys on the Internet and decided to go meet them in the woods. It’s not creepy at all! In fact, there were several father and son “groups” there.

With much anticipation, I left work on Friday afternoon and drove straight to Wolfpen. Squidbilly (who introduced me to hammock camping) and others were already there, but I found a spot and set up. Throughout the weekend, others joined and I think we ended up with approximately 20 hangers. I saw several different set ups and there were a couple of Cuben Fiber tarps I drooled over.

We gathered water, cooked dinner, sat around the fire and had a great time Friday (and Saturday) night(s).

Saturday morning after breakfast we split into two groups. One group was going to White Creek between trails 201 and 202. Since I had been there several times, I was excited to do the Wolfpen/Little Ugly/Eagle Creek loop. I knew it was all off trail, but I had heard nothing but great things. So off we went.

Shortly after leaving the trail, we came upon a nice campsite beside a creek. The highlight was the “Christmas Tree.” Someone had decorated a hemlock with Christmas ornaments. There was a nice small “bluff” adjacent to the water also.

Further down we came to Wolfpen Falls.

We continued our adventure and stopped for lunch at Fernglade Falls. A fellow hammocker that goes by the screen name of “The Lord of the Chicken Wings” was so inspired I caught him doing the Chicken War Dance. 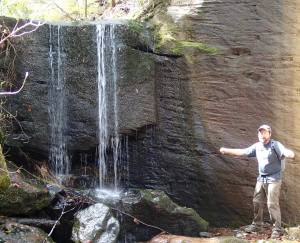 We slightly backtracked and headed over to Little Ugly/Deer Skull Falls. This is my new favorite area in the Sipsey. It is AWESOME. 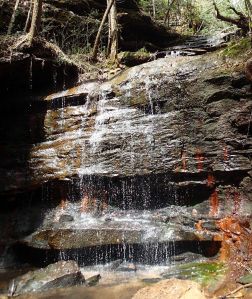 After spending quite some time in this area, we had to backtrack to get out of this small box canyon and headed over to Eagle Creek Falls. There seemed to be a nice view everywhere you looked. As we headed to Eagle Creek Falls, I heard a waterfall and went over to take a quick picture. 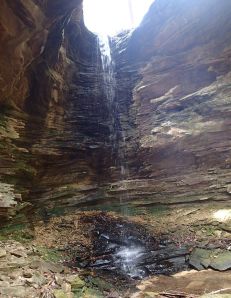 We made it to Eagle Creek Falls and rested before the climb out. 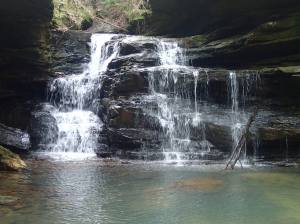 We had covered only 5 miles, but all of it was off trail and sometimes “no trail.” We made it back to camp and everyone was tired – even our unofficial mascot. We had another great evening of telling stories, sharing information, and relaxing after a great day in the woods. There was a threat of rain and storms, but it just missed us (YAY)! We decided to take a shorter hike on Sunday. Although it was only about a mile, there was plenty to see!

I LOVE being out in the woods. I wish I could get paid for it as I would rather be in the woods than at work! It is similiar to my other hobby (SCUBA) in that a little work is required to see God’s creation and be amazed. A little effort to see things that most people will never see except through the pictures of someone else.

Get out and explore – but be careful and be prepared!