Some friends and I decided that we wanted to do something different. Historically, our hikes have been “hike in/hike out” type of hikes and we wanted some variety. We decided to do a loop in the Talladega National Forest called the South Cheaha Wilderness Loop. I was excited for several reasons. This was the first time I have done more than an “out and back” AND I was able to try out several new items and REALLY test some of my gear. I’ll cover that portion in my next entry.

We met early Friday morning on March 14th and drove down to the parking area. We finally got on the trail around 10 AM after a few small delays. Since none of us have ever been on this trail before, it took us a few minutes to find the trail at the first creek crossing. Spirits were high, finals adjustments were made, and down the trail we went!

Within the first half of a mile, the climb started. Up the hill we went. Then there was another uphill climb that lasted about 1.5 miles. After a total of roughly two miles and more than an 1100 ft climb in elevation, we were rewarded with an excellent view. We stopped for snacks and hydration, but decided it was too early for lunch. Here I am at the top:

Although going up was tough, going down the other side was one large “rock garden.” This is where the trail is more rock then dirt and we had to watch the markings for the trail very carefully. Once we reached the bottom we thought it would level out a bit for the rest of the day. We were disappointed. The rest of they day was filled with ups and downs – some of them quite large. In the early afternoon as we were nearing the halfway poing we could see the road which leads to the trailhead. We knew we were close and were ready for a break. Although we could see the road, we still had quite a few hills to climb before our destination. We didn’t think the hills would EVER end! I did stop (one of many times) and looked back and snapped this picture:

Finally we went downhill to the Adams Gap trailhead and took a small break. After discussing with the others, we decided to make camp a little more than a mile up the trail. Thankfully, it was mostly downhill – a welcome break after a long day!

Shortly before the selected camping spot, we passed a chimney built by the CCC. The Civilian Conservation Corps was a public work relief program that operated from 1933 to 1942 in the United States for unemployed, unmarried men from relief families, ages 18–25 as part of Roosevelt’s New Deal. In Alabama, the CCC built many structures in the Alabama State Park System as well as rock retaining walls and bridge supports. This particular chimney belonged to a park cabin that was here many years ago.

We stopped and set up camp early – around 330 pm. We were all pretty tired from the day of hiking and I had developed a hot spot on my left heel. I have used these boots on many trips before and over a year in Afghanistan, but I think they had gotten wet one time too many and had stretched just a little. I noticed that “little bit” and it was the only pair of footwear I had with me. I had the feeling tomorrow was going to be a LONG day! Once at camp, the normal duties were done: filtering water, gathering wood, making a fire, setting up camp, and eating. We had a full moon and partly cloudy skies.

Although we had a great view early on the first day, I really think the second day was my favorite – even with the now-too-large boots! It was much more scenic, had lots of water features, and although there were some ups and downs, it was nothing like the first day! We set out in the morning around 9 am if I remember correctly, and played leapfrog with another group of hikers several times throughout the day.

The highlights of day two include Devil’s Den Falls:

I finally limped into the Turnipseed Camping area after lunch on Saturday. Several of the people were headed back home but me and another friend were going to stay to test our gear in the rain that was forecast. (The short version: we stayed dry). We had covered a total of 16.97 miles according to the GPS and a LOT of change in elevation! 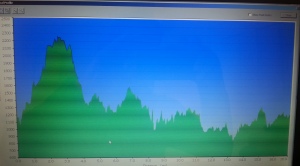 We treated ourselves to the ½ pound cheeseburger and fries from the Cheaha State Park Restaurant. We were hiker hungry – that was one tasty burger but an ever better view!!

After lunch, we took the short (1 minute) drive over to the tallest point in Alabama where I SLOWLY climbed the observation tower and took several pictures. If you are near the area, I highly recommend visiting Cheaha State Park in Alabama.